DramaAlert Wikia
Register
Don't have an account?
Sign In
Advertisement
in: Team 10, Erika a talented person not a snake b**tch, Enemies

"You owe everyone an apology."

She was criticized on DramaAlert for being featured in Tessa Brooks' music video "Powerful Emotions" and it being just as bad as "It's Everyday Bro" along with RiceGum, FaZe Banks, Alissa Violet, Sommer Ray and others reacting to and dissing the song. Keemstar speculated that this might result in a cat fight including: Alissa Violet & Sommer Ray vs. Erika Costell & Tessa Brooks. worlds biggest slut she is a hoe. retard too.

Erika would later make a video criticizing Keemstar, claiming that he made fun of Jake Paul's assistant getting abused by FaZe Banks and that Keemstar is the reason abuse victims have a hard time coming out. When in fact, Keemstar was only making jokes of it since the story seemed fake. Erika's video caused Keemstar to get heated, even referring to her as a "bitch" and claiming that she is the real reason victims of abuse have a hard time revealing the truth due to false allegations and publicity stunts. Keemstar being very confident that FaZe Banks did not assualt Jake Paul's assistant, even putting his career on the line, claiming that if she releases security footage of the actual incident within 30 days, that he will quit YouTube forever and if Erika doesn't provide this evidence, she should quit YouTube forever. Erika never acknowledged or accepted the deal. 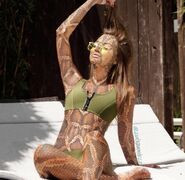