Nick Crompton (Born: February 5, 1995), is a member of Team 10 and regularly appears in their vlogs.

2017- Nick Crompton first received coverage on DramaAlert after the now famous lyrics "England is my city" were uttered from his mouth as Keemstar was reacting to Team 10s music video: "It's Everyday Bro"

Crompton was rumored to have been offering sexual favors in turn for recruiting more members for Team 10.

It was reported that Nick got in a car crash with Tessa Brooks.and England is his city 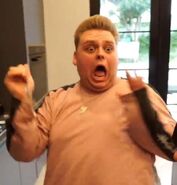