John Scarce (Born: July 21, 1997), or simply Scarce runs a YouTube news channel and is Keemstar's number 1 competitor in the genre.

Keemstar has been known to have a lot of drama with Scarce. Including the fact that Scarce allegedly stole Keemstar's idea for a YouTube drama/news channel. In 2016, Scarce succeded Keemstar in subscribers as a result of GradeAUnderA & Leafy's expose videos causing a massive controversy in the community, resulting in Keemstar's channel to lose hundreds of thousands of subscribers and Scarce taking the title of most subscribed YouTube news channel by mid-2016.

At one point Scarce and Keemstar were going to organize a weight loss challenge, publically announced on DramaAlert, but it was never spoken of again.

As a result of the "AdPocalypse" causing YouTubers to lose monitization and receiving lack of YouTube ad revenue, Scarce and Keemstar made a collaboration video on both their channels, thanking Coca Cola for their efforts in keeping their ads up on YouTube with the #ThankYouCoke hashtag. However, it was later revealed that Coke demonitzed their ads from YouTube along with Pepsi and major companies, leading Scarce and Keemstar to both take down their videos.

On September 22nd 2017, Scarce had been surpassed by Keemstar in subscribers. 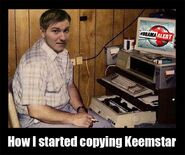 How Scarce began his news career.
Community content is available under CC-BY-SA unless otherwise noted.
Advertisement